This past week was a two-fer of urban fantasy. Two great books that couldn’t be more different. I’m going to talk about both of them.

Up first was the debut novel from Mur Lafferty, The Shambling Guide to New York City. This novel is urban fantasy with a dash of chick-lit.  It is a breezy, funny tale with a great lead character, wonderful supporting cast, and cracking plot. It plays into many of the cliches of the urban fantasy genre, but has a few notable twists that set the story apart.

The story focuses on Zoe, a travel-guide editor who has fled to New York to escape a messy personal situation from her prior job. Her savings are running out, and there are few prospects on the horizon when she comes across an ad for a position with a new publishing company. Despite being told multiple times that she won’t fit in, she fights for the job and gets it. Soon after getting the job, she finds that she is the sole human, hired to edit a travel guide for monsters — or as they prefer to be called, “coterie”.

It is a “hidden world” setting. The vampires, zombies, fey, and more live alongside humanity but are publicly unknown. In one of the more interesting twists in the story, the city’s Public Works department acts as a kind of police force, protecting humanity from the darker coterie entities out there, and helping to maintain the secret of their existence.

Another interesting approach is the character of Zoe herself. She really is just a writer, looking to do her job and put together a good travel guide. She isn’t the born badass that identifies many of the protagonists in the genre. The dangers of dealing with coterie do require her to step up her game though, and as the story progresses she demonstrates a strong will and determination that carry her through despite the lack of ‘chosen one’ status.

On the other hand, Chuck Wendig’s The Blue Blazes is an urban fantasy crossed with gritty crime novel. It is a dark, brutal tale of organized crime and brings a new meaning to the term “criminal underworld”. The fantasy element here is lot more Lovecraftian, with forgotten gods, cults of bestial humanoids, forbidden magic, madness, and death. 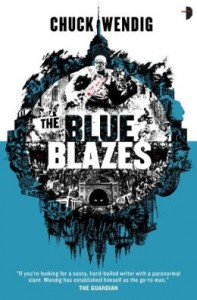 Our main character is Mookie Pearl, a brick house of a man who works for “The Organization”, a mafia-style crime ring in New York City. Mookie is an enforcer, and manages the harvesting of Cerulean, a drug that allows its users to see the truth of the supernatural world and also boost strength and stamina.

Mookie’s life is turned upside down when the Boss — the head of the Organization — announces he has terminal cancer, and his estranged daughter comes back into his life. This sparks a chain of events that leads to the discovery of a conspiracy that could change the face of New York — and likely the rest of the world.

Blue Blazes is brutal and violent. The cast is blue-collar, doing their best to get by in a difficult world. Choices are made, and prices are paid.

While in some respects they are very different, both books feature strong, well developed characters. Both books have excellent world-building and are well-paced. I strongly recommend both of them.