Last time was dedicated to Attribute selection. As you may have noticed in some of my reasoning, the choices were not made in a vacuum — there were times where later choices influence what I decided to do. For example, looking at the available spells to see what the Effect Step would be based on different Willpower values. 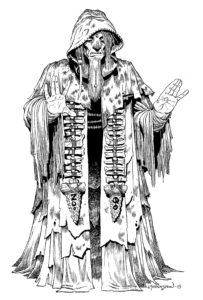 This bit of forethought becomes easier as you become more familiar with the game and the options available (especially to starting characters), but even if you’re new to the system and building your first hero, don’t be overly shackled to the process described in the book. If, at a later step, you find you want to go back and tweak something from earlier, go right ahead. The character isn’t done until you set out on that first adventure.

(Even then, I encourage gamemasters to allow ‘mulligans’ — especially for new players. It is possible they may find the character isn’t performing as well as they hoped, or that certain choices had unforeseen consequences. Since many of the players in the Legends of Earthdawn podcast were new to the system, one of the things I did was offer advice on their builds, pointing out potential pitfalls. I think experienced players and gamemasters have some obligation to help out the newcomers.)

All of that said, let’s continue with the character creation process for Virag.

There really aren’t any choices to be made here. The numbers are derived from the Attributes chosen in step 3, but going over these numbers might prompt you to go back and tweak how you spent those initial build points. For example, if you see that your Dexterity is one point shy of getting a Physical Defense increase, you can go back and see if shuffling some things around might help you get that without losing out in another area.

Here are Virag’s derived characteristics, based on her Attributes.

As with the previous step, there ins’t really a choice to be made here. Or rather, the choice was made back in step two when I decided Virag would be a troll. As a result, she has:

Okay, back to some choices. Virag has 8 points to distribute among her talents–5 Discipline and 1 optional. She also gets two free Standard Matrices (which can inform the selection of optional talent).

While it is possible to assign up to Rank 3 at the start, as with Attributes I tend to prefer a more balanced approach. You never know what might come in handy. If you look at things from a perspective of most efficient use of Legend Points to advance, going with four Discipline talents at Rank 2 means you only need to spend 300 Legend to qualify for Second Circle, you end up not having any ranks in one of your Discipline talents, and no optional talent.

That isn’t necessarily a problem, depending on your Discipline and whether you know what you’re doing. You might want to hold off on selecting an optional talent until you have a better sense of who your character is, or looking to fill potential holes in your group’s suite of abilities.

Back to Legend Point efficiency, any other distribution of starting points would cost more Legend to qualify for Second Circle, but only by a couple of hundred points. In the grand scheme of a character’s career, that isn’t much of anything.

So… Virag. I place one point in each Discipline talent, which leaves me with three points. Before I go any further, I take a look at the optional talents available to Nethermancers, and decide which one I want to start out with.

While there are several good options, my choice is obvious: a third Standard Matrix. The flexibility this offers a starting magician cannot be overstated. Having an extra spell available on short notice can be extremely helpful (though this depends on your starting spells). Other choices are certainly valid, especially if you know what you’re doing or have a particular build objective in mind.

If I’m going to take a third matrix, that uses up one of my three remaining points, and there’s no sense in putting more into it. A starting magician–even if they decide to take a Second Circle spell to start–can’t put a spell higher than First Circle in a matrix.

With all my starting talents selected, all that remains is where to spend my last two points. Looking at the Attributes connected to my Discipline talents, all of them except Frighten are based on Perception. Since I have a Step 7 Perception, that means all but Frighten are starting at Step 8. If you recall from last time, I recommend doing all you can to have as many starting talents as you can at Step 8, to get into those multiple-die Steps.

All right then. I might as well put one of my remaining points into Frighten to bring that to Step 8. One point to go.

Spellcasting is, in my opinion, the best option here. It’s the one that most benefits from a higher Step, and consequently a higher average result. But let’s go over the other talents, and the reasoning there.

Nethermancy has fixed difficulty numbers–First Circle spells have a standard thread weaving DN of 5, and 10 for reattuning on the fly. Step 8 has a fairly good chance of success against a 5 (about 83%). Reattuning on the fly is more difficult (only about a 17% chance of success without Karma), but I’ll leverage my third matrix, and make sure my “standard” spell attunement is weighted more toward being prepared for the heat of the moment (aka combat). If I need to swap out on the fly, I can use my Karma (increasing my chance of success to about 83%), but with only 3 points per day, that’s a precious commodity.

Patterncraft has both fixed and variable DNs. It’s fixed for learning new spells (DN 6 for First Circle, DN 7 for Second Circle, etc). Step 8 gives me better than even odds for both of those, and since learning new spells costs Legend Points, it’s not something I’m likely to do early on anyway. The DN can vary when it comes to using Patterncraft to analyze magical stuff, but I’m not sure how much of that is going to factor into this game. Extra information can be helpful, but not critical.

Astral Sight can benefit from the higher results available with higher Steps, but Step 8 puts me at a decent chance of success against the base DN of 6 for seeing into astral space, and even odds against the modified DN of 8 for “Open” Astral Space. I’m probably not going to be using Astral Sight for more than getting a sense of how corrupted local astral space is, or whether a given item is magical–actually studying patterns is based on the target’s Mystic Defense, and probably a bit out of my reach (at least without spending precious Karma).

Firghten I’ve already raised to Rank 2, and with my balanced approach, probably doesn’t need any more. Especially with my concept of going against type. Sure, making it Rank 2 already works against that concept, but I’m also willing to sacrifice some aspects of concept in the name of numerical advantage. I can make it up through my character portrayal, and not relying on the talent too much.

Spellcasting, obviously, goes against the target’s Mystic Defense. The higher my Step, the higher the average result, the more likely I will be able to affect targets, and get potentially more successes. Last point goes there.

Also, once I’ve gotten a few Legend Points under my belt, it’s only a matter of a couple days to bring up those other ranks. Here’s where Virag’s starting talents stand, with the rank in parentheses, and the final Step and dice after:

That will do it for this installment. Next time we’ll wrap up the series.